The other day I started a project that I have been meaning to do for a very long time.

I have several shoe boxes of old hand-written letters that I wrote and received nearly 24 years ago.

I had just moved away from home.  This was the early eighties so there wasn't any e-mail yet.

The letters consist of those written to me and also the ones that I sent home. My parents kept those letters and later gave them back to me.

I have undertaken the project of typing these old letters into my computer journal program.

NOTE: The great thing about using journal software has been that it gives me the ability to categorize all of the letters and journal entries by the original date that the letter or entry was written.

Yes I type very fast, but It will take me a very long time to type the 200 or more letters, but it will be worth it!

Then I Added Journal-Like Commentary

One off the best ideas that I came up with was to make present-day comments about what I wrote in my letters back then. 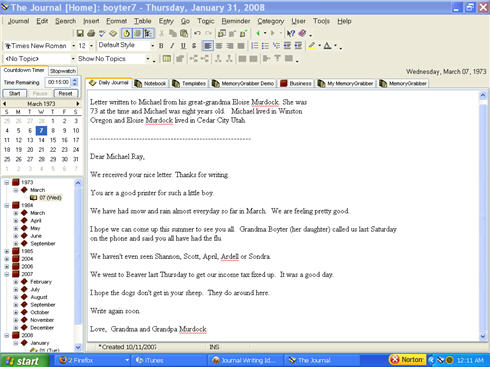 The above is a letter sent to me (Michael Boyter) from my Great-Grandma
Eloise Murdock.  She was 73 years old at the time and I was eight. Yep, she was born on January 1st 1900.

You will notice in the left-hand column that I was able to backdate all of
my entries.  The postmark on the letter was March 7th 1973, so I entered
it into my Journal Software program on that same date.

Wow, wouldn't great-grandma be surprised that her letter would have such staying-power and be on something called the Internet (something she never heard of before she passed away in 1985) in 2008?

As I type, I recall (relive), as best that I can, the events that surrounded me at the time of originally writing those letters.  Thoughts come to mind that I hadn't included in the original letter.

I type my added comments throughout the letter, but in a different font and/or font color.

Another example was how I tried to sound brave and not let on that I
really missed home. Truth was that I was so homesick that I couldn't
hardly stand it!

So I type my old letters pretty much word for word in a regular font.  Then as needed, I add my present-day comments.

I've had a lot of fun with this. I look at it kind of like a VH1 pop up version of my journal!

It Has Been a Blast from the Past


I wanted to do this for the following reason:

Additionally, saved e-mails and instant messages could be used as journal
entries that could use the benefit of additional commentary.

So, if you have any old letters sitting around in old boxes somewhere, it's
time to get them out and start doing something with them!

You'll be happy you did!

Have your say about what you just read! Leave me a comment in the box below.
FacebookTwitterPinterestTumblrRedditWhatsAppMessenger